Classis Ravenna, the new Museum of the Ravenna and of its territory. Classe is fundamental for the historical importance of Ravenna.
The museum wants to narrate specific historical moments and all the stories that talk about Ravenna’s history and its territory. 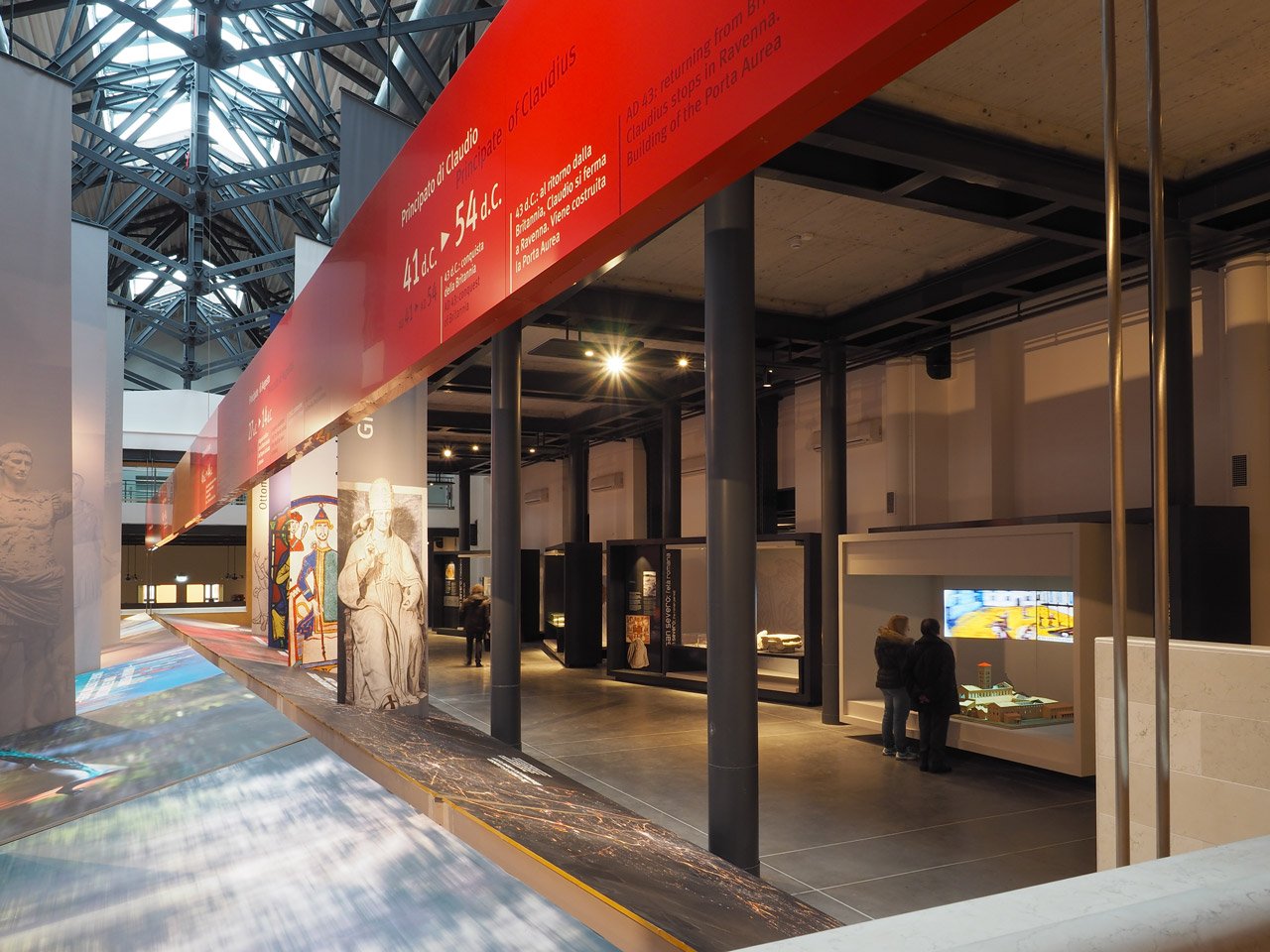 It’s a fascinating story that sees as a protagonist one of the most important cities of the Mediterranean.

Along the time line, that is the main attraction of the exhibition, are shown all the different time periods that regard the city and its territory: the Etruscan-Umbrian origins, the ancient Romans, the Goth period, the Byzantine period and the Middle Ages.

Next to the time line, you can find detailed studies regarding the growth and development of the city, its layers, the fleet and the voyages, its varied ethnicity, the artistic production, the funeral habits and the praying manners.

Ravenna and the sea

Ravenna’s relationship with the sea is an essential trait of its history.

Ravenna is an important intersection for commercial reasons and relationships that strengthened in ancient times with all the Mediterranean area.

During the late ancient age it was one of the most important commercial ports of the Mediterranean. 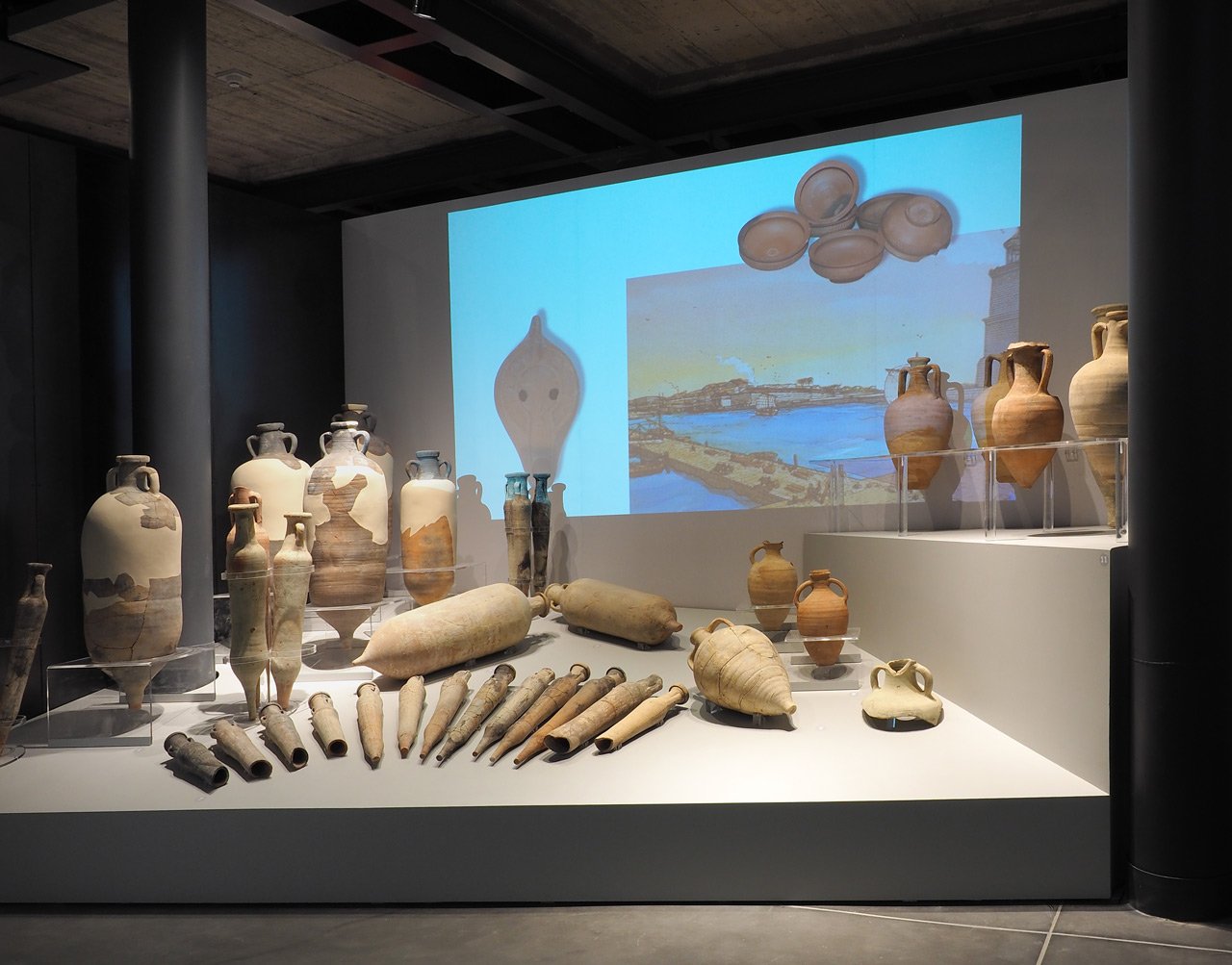 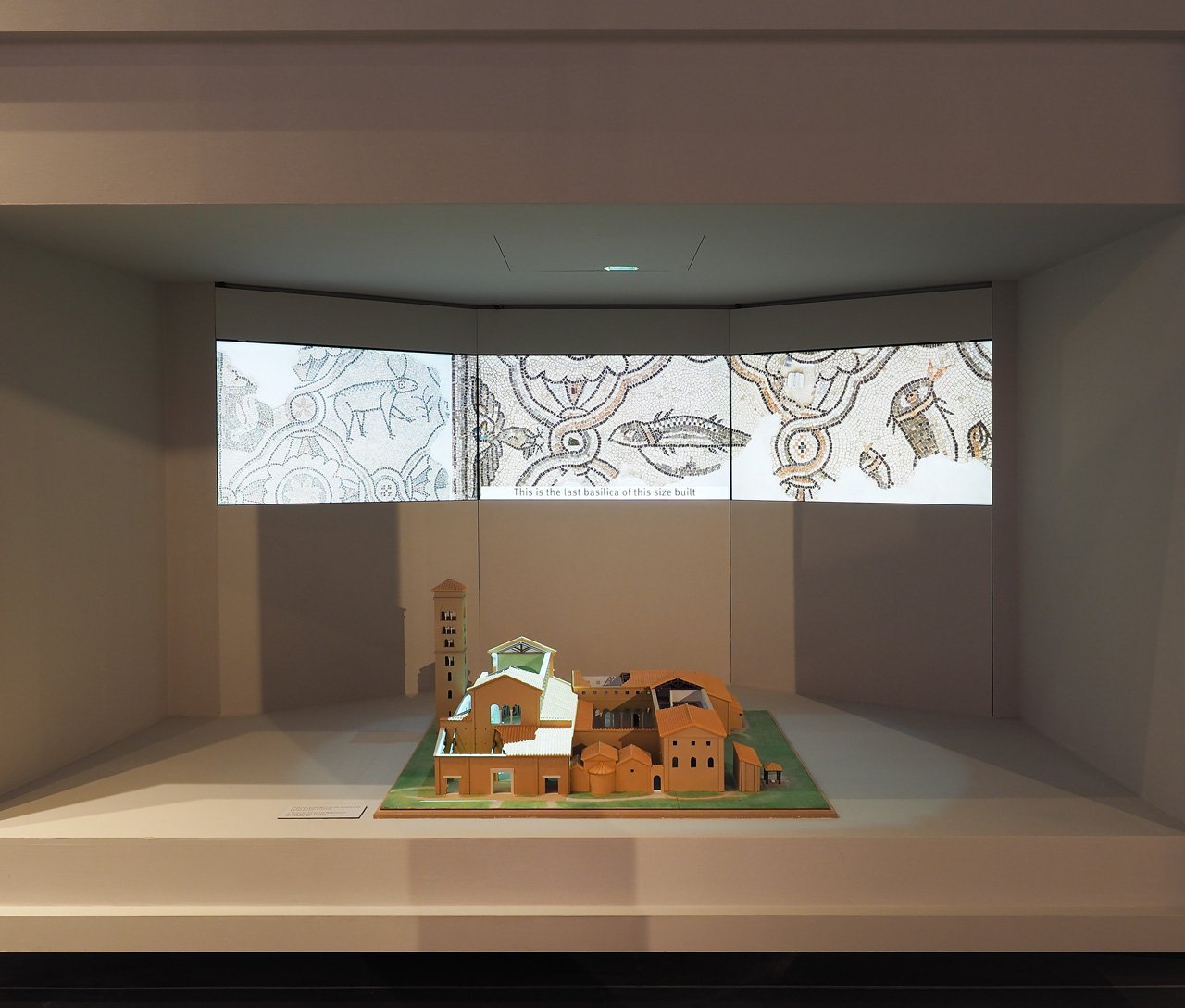 San Severo: from the villa to the monastery

Through pictures, maps and graphic elaborations you can see the whole evolution in time and all the phases of the archaeological site. From the Roman Villa to the monastery of San Severo, an important location until the Ottonian age and further on.

A small section of the exhibition is dedicated to the Museum’s building.

Here, during the first decades of the last century, 600 workers transformed tons of beetroots in mountains of sugar that, reached Italy and Europe by boat or railway. After came the decline of the factory and in 1982 it shut down.

The historical pictures show how the form sugar factory was and the testimonies of those whom worked there. The history is shown on video. The factory is one of the most important archaeological reconstructions made on a national scale. 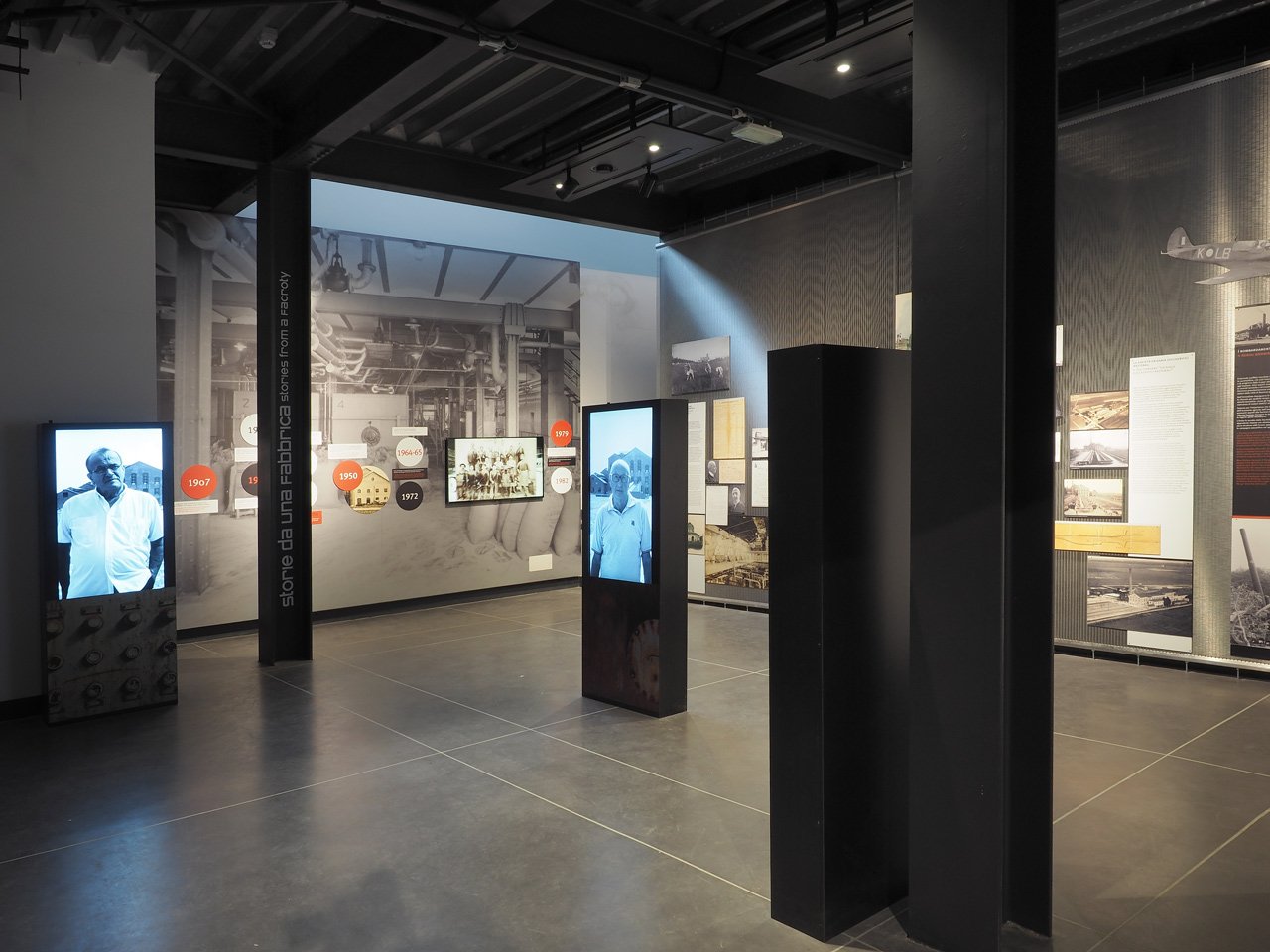 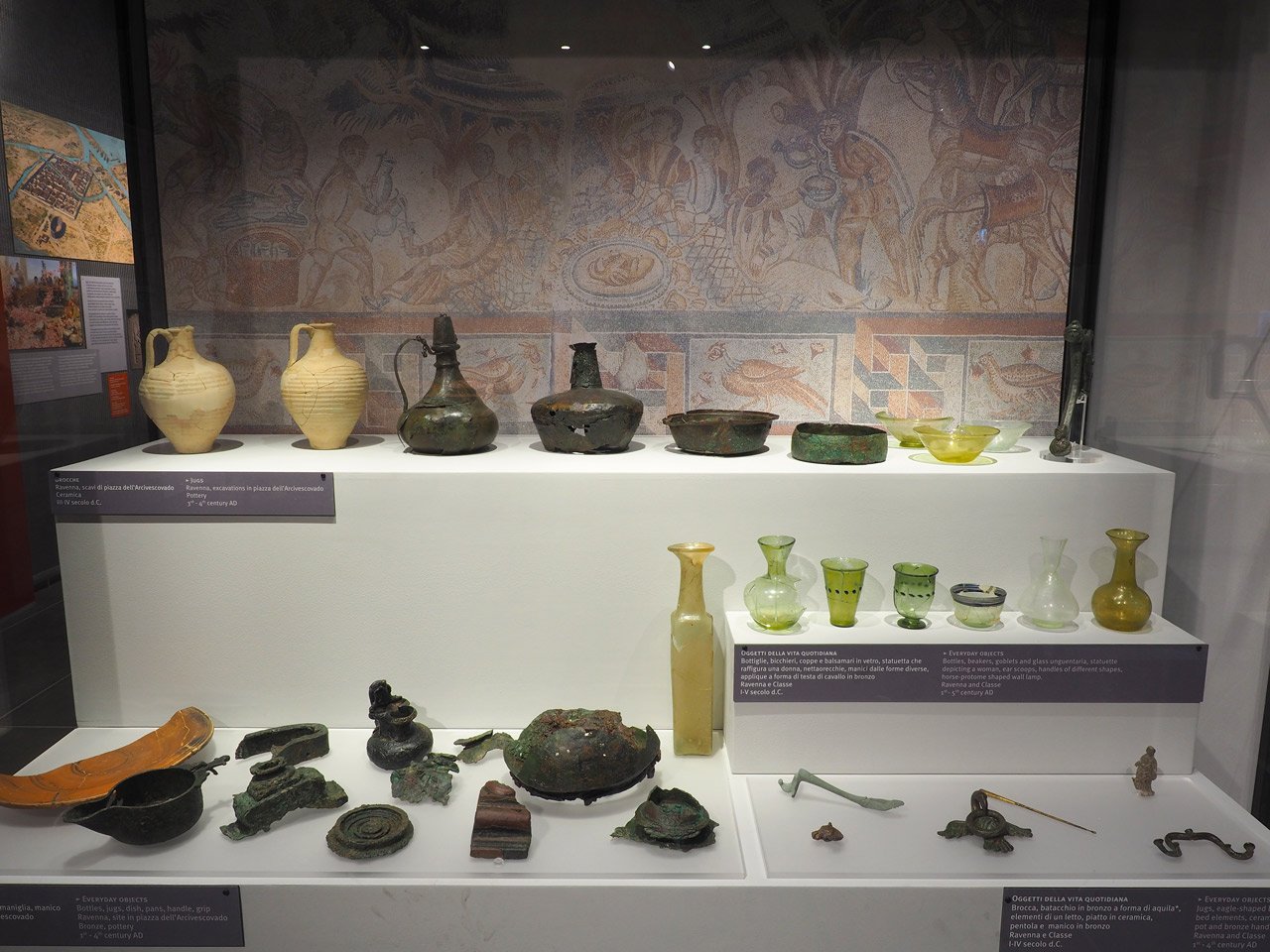 This tale is based on the archaeological documentation with a targeted use of the artifacts important for the story-telling: sometime there will be individual elements with an important role as protagonists; other times, wide groups of objects, as in the case of Classe’s port, that can be shown thanks to the thousands artifacts found in late excavations.

The daily life objects (amphorae, ceramics, coins) find an appropriate place next to the most important and valid materials on an artistic point of view (statues, mosaics and more).

A small section of the exhibition is dedicated to the museum’s building: an important monument of the industrial archaeology, whose importance in the past is vivid in Ravenna’s memories. Also this monument will be explained and told about. The former sugar factory is indeed a real cathedral like Sant’Apollinare’s Basilica is. It is not odd that from afar the two buildings emerge on the horizon as common and usual architectural buildings. A cathedral/factory of the memory with the intent to give back to the community its local history; and in the meanwhile the goal is to describe to the many tourists that come to Ravenna a fascinating and important episode of the city’s history.

CLASSIS Ravenna – Museo della Città e del Territorio, together with the Ancient Port of Classe (inaugurated in 2015) and to the Basilica of Sant’Apollinare in Classe, form the Archaeological Park of Classe that will be completed when the Basilica of San Severo becomes a museum. 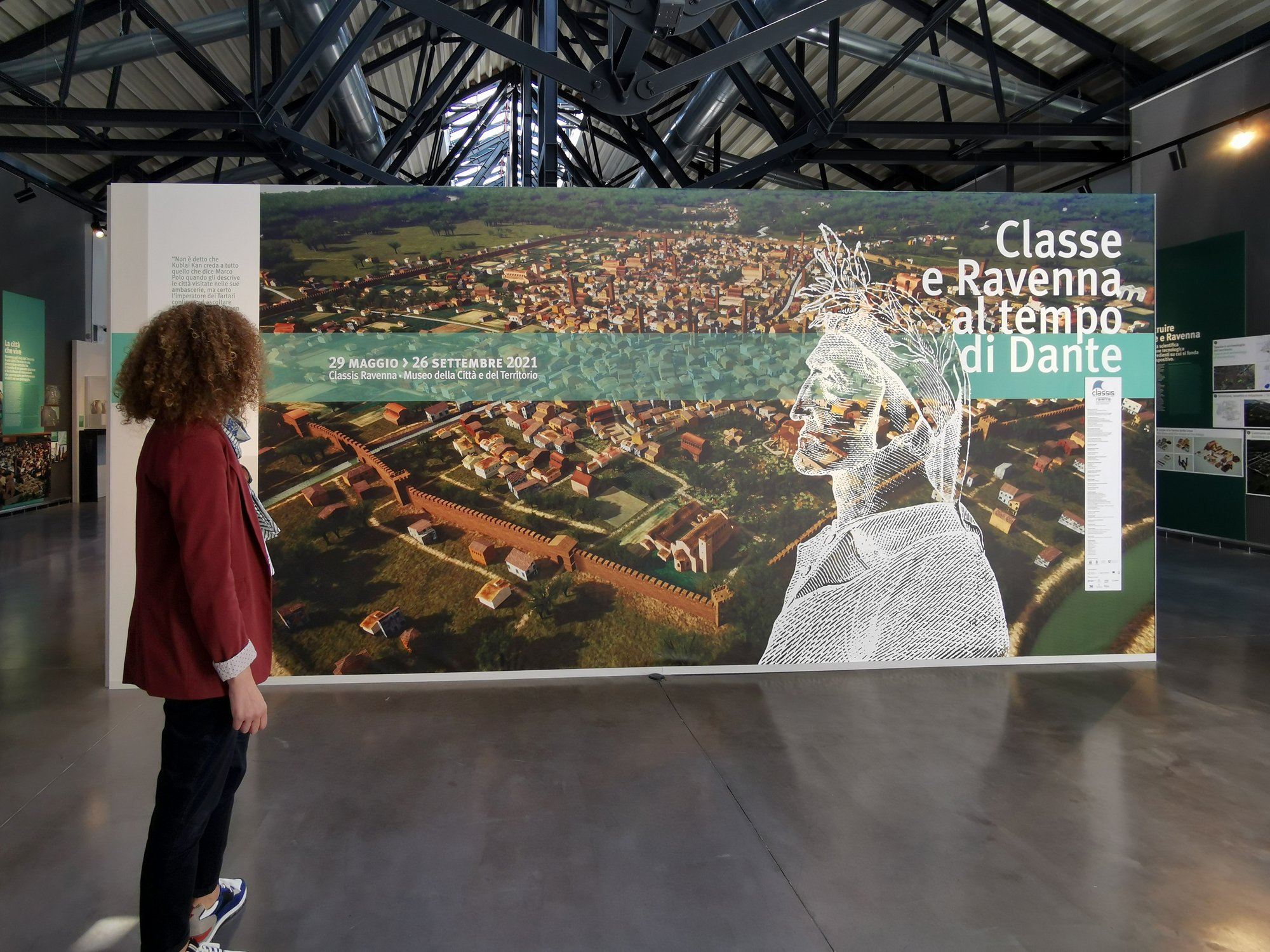 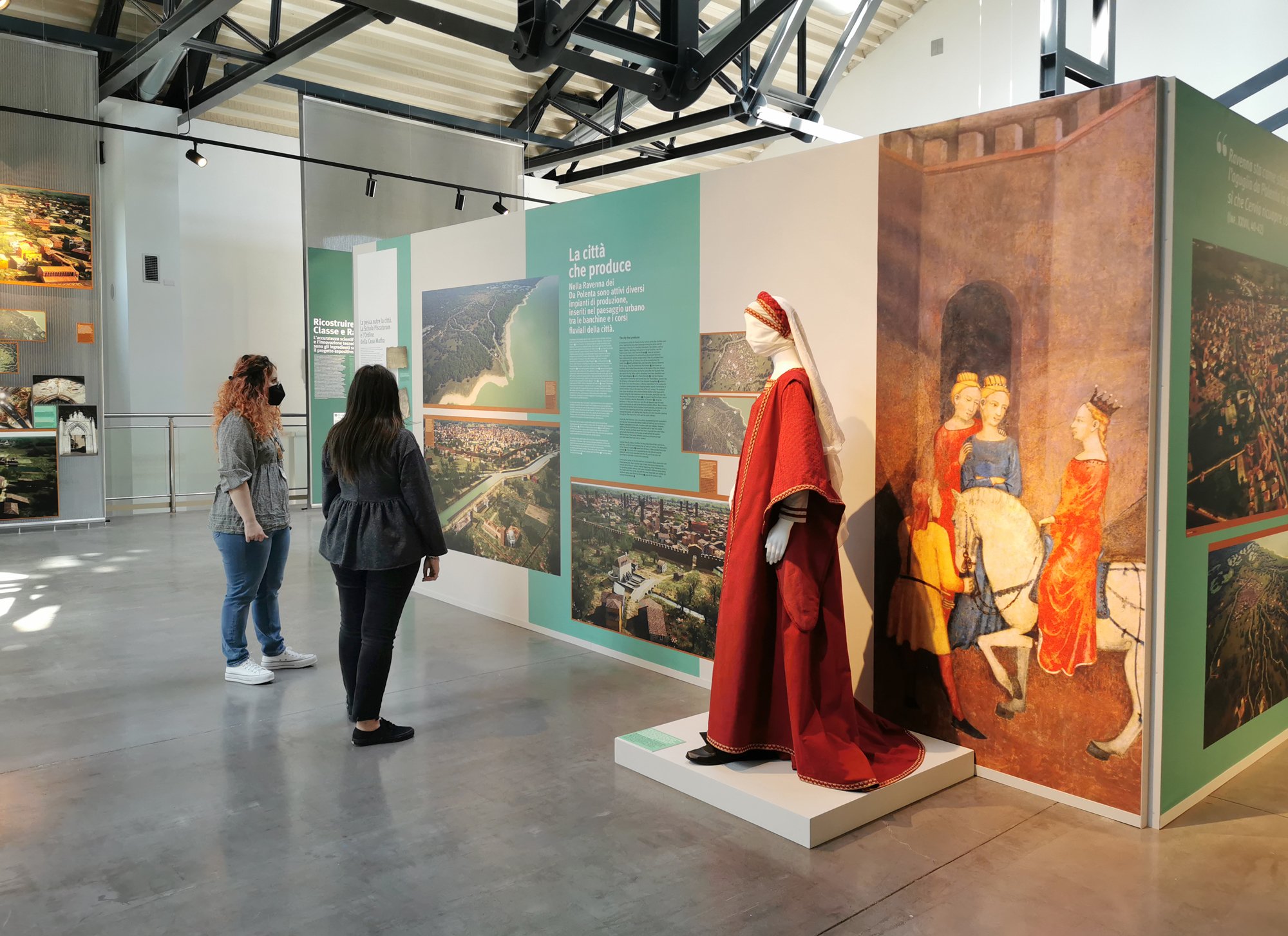 What kind of city did Dante find when he arrived in Ravenna? Was the relationship with the sea and waterways still of the same importance as it was during the Roman era? How did the relationship with Classe and the surrounding area looked like? What kind of monumental panorama did he see? But above all, how was life in Ravenna when the city welcomed the Poet in the last phase of his life?
These are the main questions the exhibition tries to answer through an original and targeted research that reconstructs monuments and landscapes of the city of Ravenna and Classe at the time of the Poet, with highly evocative techniques.

It is a fact that our cities are the result of complex urban and monumental stratifications: many traces of their eventful past have been lost. This also applies to Ravenna where, excluding a few exceptional monument (San Vitale, Sant’Apollinare, Galla Placidia, Mausoleo di Teodorico and a few others), there are no concrete traces of its overall structure through the various historical periods; this certainly applies for the Roman period, but also for the Late ancient and Medieval ones.

During his life, Dante sojourned in Ravenna and certainly saw some of its most important monuments, from which he drew inspiration for the Comedy; he also frequented the surrounding of the city, in particular the Pineta of Classe, to which he dedicated very impressive verses. Without any certainty about of the layout of the city, we know little of the daily life of its citizen, of which the exhibition offer some insights: the city that lives, the city that produces and the city that lives.
In addition to all the identified documents, the images and reconstructive drawings, ancient testimony of the time are also in display: a selection of six archaic majolica mugs found in the well inside the church of Santa Croce in Ravenna, a polychrome wooden sculpture of Madonna con Bambino made in the Emilian-Venetian area, a fragment of the architectural decoration of a building located in the area of Ravenna and a mosaic fragment from the apse of Basilica Ursiana.

Created especially for the exhibition is the medieval dress made by Associazione Mercato delle Gaite di Bevagna, based on the female figure of Dante’s Beatrice.
Of great importance are the 3D reconstructions, made by Studio Tre digital s.r.l., of the city and the surrounding area, which are intended to provide an urban and landscape picture of Ravenna and its territory around 1300.

Open to public: extended until January 9,2022
Visiting hours: everyday 10am – 6:30pm
Entrance: included in the ticket of the Museum with special price 5€
Info and reservations: 0544 473717 or classisra@ravennantica.org

Recovered treasures. The banquet from Byzantium to Ravenna 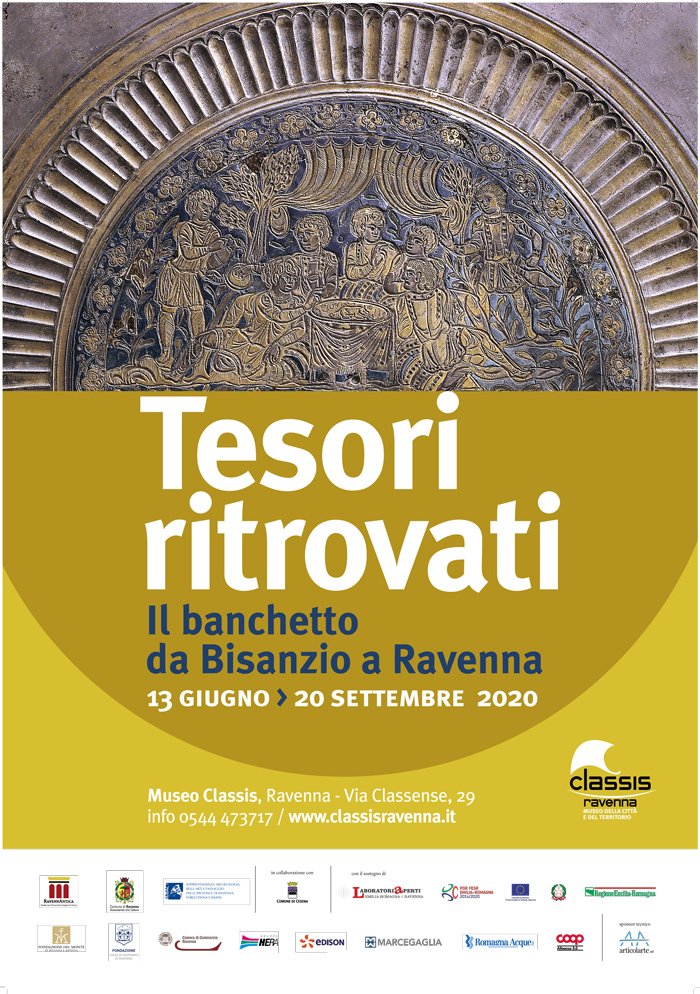 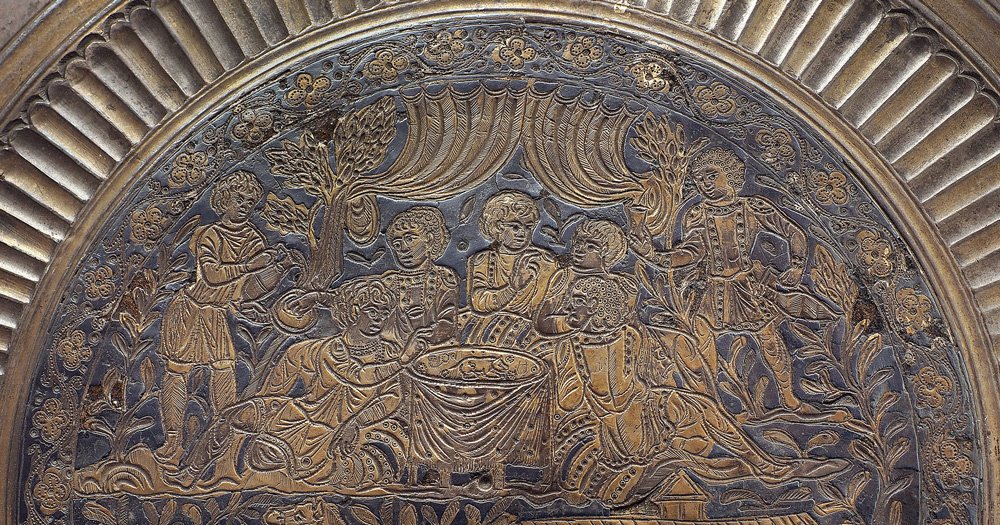 Ravennantica enriches its range of cultural offers with the new exhibition “Recovered treasures. The banquet from Byzantium to Ravenna” held at the Classis Ravenna Museum.

The temporary exhibition “Recovered treasures. The banquet from Byzantium to Ravenna”, delves into the topic of the late antique banquet and displays some items of silver tableware excavated in Cesena and in the archaeological site of the Ancient Harbour of Classe.

The exhibition starts with the documents related to their discovery: the feature of the hidden treasure and its lucky retrieval is crucial to a number of archaeological findings to the collective imagination. In antiquity, many treasures had been concealed deliberately to protect them from an imminent danger (such as wars, civil conflicts and epidemics).

Burials were always thought to be a temporary solution in order to safeguard the precious goods and recover them later; however, they often turned out to be permanent. As in the case of the archaeological findings shown in this exhibition, a number of historical reasons prevented the owner from recovering them, whence the title “Recovered treasures”.

The ruling class of the Late Antiquity had a number of ways for representing themselves at their disposal. Amongst these, there was the commission of precious objects to specialized craftsmen. Silverware, in particular cups, jugs, cutlery and large plates were among the most popular items.

These objects usually depict ancient myths or rural and banquet scenes. The choice of these models finds an explanation in the need of the commissioners to exhibit these objects as status symbols and expressions of their cultural roots. In most cases they are high-quality products manufactured in the most prominent artistic workshops of the Empire.

This exhibition, promoted and organized by the Archaeological Park Foundation of Classe – Ravennantica, the Municipality of Ravenna, the Culture Department and the Superintendence for Fine Arts and Landscapes for the provinces of Ravenna, Forlì-Cesena and Rimini, fits perfectly into the expositive path of the Classis Ravenna Museum, and further develops some of its strong points: through the selection of the displayed objects, it provides a focus on the ritualism of the late antique banquet. Furthermore, thanks to the comparison between the plates from the Archaeological Museum of Cesena and the Small Treasure of Classe, comprised of seven spoons and a patera, it is possible to trace the history and the evolution of the symposium, to appreciate its ritualistic overtones, highlighting and encouraging a dialogue among the various museum entities of the region and finally promoting the exchange of insight and knowledge about our past.

famous marine mosaics are the heart of the temporary exhibition in Classis Ravenna.

On October 12th from 6 pm on, for the RavennaMosaico 2019, Biennale of Contemporary Mosaic, the Classis Museum of Ravenna will present “Sea Mosaics”. From the ancient mosaic to the modern replica, curated by Giuseppe Sassatelli. This is the exhibition that inaugurates the section dedicated to temporary displays of the museum.

The heart of the event are the valuable marine mosaics belonging to the exhibitions found in the National Archaeological Museum of Naples and the Civic Museum of Piombino. The objective is to highlight, in an evocative way, the art of the mosaic as a language with a great potential and the long-term relationship that Ravenna has had with the sea.
The marine mosaic that was kindly provided by the Archaeological Museum of Naples is an outstanding event because it is a permanent exhibition that isn’t usually moved from Naples for conservative reasons. It can be dated back to the Second Century b. C. and was found in the House of the Faun in Pompeii. It was made using the first Pompeiian style: it has a frame with vegetable elements, birds and other animals and it depicts some varieties of edible fish of the Mediterranean Sea.
Apart form this mosaic, which is enough to justify a tour to the following exhibition, there are other valuable artifacts that are hosted: specifically, an important mosaic found in the archaeological area of Populonia and the copies of ancient mosaics which belong to Severo Bignami’s collection. He was a sophisticated connoisseur and an expert in replicating Roman mosaics.

On inauguration day will be present: Michele De Pascale, Ravenna’s Mayor, the Member of Ravenna’s Council, Elsa Signorino, the President of Fondazione RavennAntica, Giuseppe Sassatelli, the Director of the National Archaeological Museum of Naples, Paolo Giulierini, the President and the Director Val di Cornia Parks Spa, Francesco Ghizzani Marcìa and Silvia Guideri, the Director of Fondazione RavennAntica, Sergio Fioravanti, the Architect, Andrea Mandara, the Teacher, Severo Bignami, the Professor, Marcello Landi and the Professor, Saturno Carnoli.
Marcegaglia, Hera Spa, Molino Spadoni and Quicklighting will participate to the event representing the main sponsors for the exhibition.

At the end of the inauguration there are going to be guided tours at the exhibition. 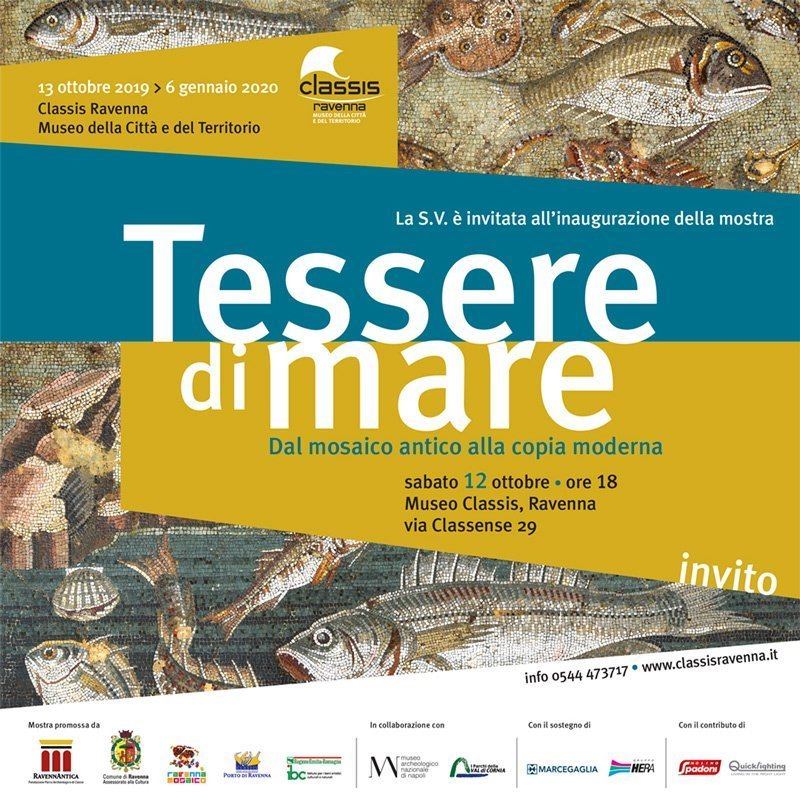 To send us an email please use this form.
We will answer you as soon as possible.